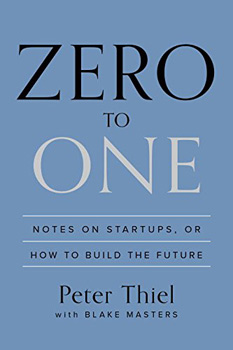 Zero to One: Notes on Startups, or How to Build the Future Peter Thiel with Blake Masters

This is my first book review/discussion on this blog — hopefully the first of many!

Recently I became interested in Peter Thiel after watching one of the many interviews he has done in recent weeks. For those of you who don’t know, Thiel is a leading figure in the high-tech and libertarian communities. He is a co-founder and former CEO of PayPal, the first outside investor in Facebook, co-founder of Palantir Technologies, co-founder of Mithril capital, president of Clarium Capital and a managing partner at Founder’s Fund. Through his philanthropic work he has contributed substantially to the Seasteading Institute, Singularity Challenge, Singularity University, Machine Intelligence Research Institute, Methuselah Foundation, and the SENS Research Foundation. He also founded the Thiel Fellowship Program and Breakout Labs.

Despite being a hardcore libertarian seeking to maximize human liberty, Thiel is never a ranting ideologue. Thiel rarely discusses politics and usually avoids answering political questions when asked. His current attitude towards politics, as far as I can surmise, is that the democratic process is no longer an efficient way of achieving human liberty. Thiel would rather focus his energy on liberating technologies – the internet, decentralized cryptocurrencies, radical life extension, seasteading (colonizing the oceans) and spacesteading (colonizing outer space). The escape from the ever-expanding state, according to Thiel, is not to be achieved within the system but through technologies which allow people to live outside the system.

Despite shying away from and dis-avowing politics in public, Thiel still contributes to candidates, primarily Republicans, perhaps to stave off the encroachment of the state into the tech sector.  When asked on Reddit why he contributes to Republicans even though he is a gay libertarian, Thiel responded by saying he wouldn’t have donated to those candidates if he thought they were against gays. Besides the obvious libertarian Republicans, I’m guessing the rest of the Republicans he has donated to can be summarized as “fiscally conservative and socially apathetic”.

In any case, as with his public face, Thiel’s book is not at all ideological and argues against ideological thinking. Although there are a few libertarian talking points from libertarian ideology in the book, in each instance they are counterbalanced by different and usually even more contrarian points. For instance, Thiel rejects the notion of “Randian movers” (figures such as Dagny Taggart & Hank Rearden in Atlas Shrugged.) Instead he presents different arguments for the cultural importance of the startup founders as almost mythological figures, together with the notion of a startup as a “beneficial cult”.

When addressing the question as to why technological progress has been so rapid in the area of computer technology, but slow in other areas such as aerospace or biotech, Thiel mentions the “standard libertarian explanation” that the former is barely regulated while the later sectors are heavily regulated. Acknowledging that this claim is true, Thiel then says that it ignores other, possibly even larger factors. In particular, Thiel makes an interesting case for a cultural explanation for this phenomena. The trajectory of science fiction from the 50s to the 00’s has been, largely speaking, one from technological optimism to technological pessimism. Only in the IT community has a a sense of optimism been sustained. In this sense, Thiel identifies IT-geekdom as a counter-cultural movement.

Thiel also cites the libertarian explanation for the green-tech bubble — that “gov’t subsidies were too liberally applied and grossly inefficient”. Thiel acknowledges this was a factor but offers a host of what he considers better explanations — a failure of companies to meaningfully distinguish themselves with new technologies and a failure to of companies and investors to acknowledge and predict the competition. In particular the solar panel industry in the US was obliterated by two sources of competition — ruthless price-competition from Chinese gov’t backed firms and the sudden rise of cheap natural gas via fracking.

A highly publicized part of Thiel’s book is his argument that monopolies are good. Thiel argues that startup founders should aim for a situation with no competition rather than one with lots of competition. While on the one hand competition encourages economic efficiency, it is also bad because “competition means no profits for anybody, no meaningful differentiation, and a struggle for survival”.  Thiel says that currently our society is trapped in an “ideology of competition”. The ideology of competition extends beyond economics into all levels of academia, which focuses on competition between peers for entry into top schools, grades and grants. Competition leads people to pursue small incremental improvements over others, not radical change. In other words, Thiel says that “ Rivalry causes us to overemphasize old opportunities and slavishly copy what has worked in the pas_t”. Thiel argues that a startup founder’s goal should not be to “beat the competition” but rather to have a monopoly on a technological secret (and branding and distribution) so that no other company can compete with you.

Thiels claims have a strongly contrarian streak since the prevailing view is that monopolies, while certainly good for the monopolist, are bad for society as a whole. Although most of Thiel’s writing argues for the benefits to the monopolist, Thiel also argues that monopolies are good for society as well. In my view, Thiel could have done a much better job defending this stance and hence has received some pushback. In subsequent interviews following the publication of the book, Thiel has been repeatably been pressed on this point and has had to explain what he failed to explain in the book.

When Thiel discusses monopolies, he is referring to what he calls “creative monopolies” (the type discussed in the book) and not monopolies with 100% control over a particular market, such as can be achieved through patents or gov’t decrees. Thiel believes monopolies are good because they create fundamentally new things for consumers. He argues that many of the most successful and highly-praised companies today are actually monopolies – ie. Google, Apple, Tesla and Facebook. We don’t realize they are monopolies because they constantly are arguing that they are not. Facebook aside, it’s hard to argue that the world would be better off without the Apple, Google & Tesla.

Additionally, Thiel believes that as long as the market is functioning and start-ups do not face regulatory barriers to entry, monopolies will either be overtaken by new startups or be forced to compete with them. Large companies get stuck in certain patterns of thinking and are not flexible, while startups are highly flexible and free thinking. Thiel acknowledges that large companies will often buy small startups, but he thinks this is often the best outcome. Most importantly, Thiel argues monopolies are good because they can reap a large profit, whereas competition drives profits to zero. In addition to signalling an improvement in the human condition via the identification of an economic inefficiency, large profits are good because they give companies capital, which can be invested into better technology and capital equipment. In other words, without monopolistic profits, companies would have much less ability to invest in research and development.

I highly recommend this book for anyone interested in technological development. It contains many novel ideas you won’t find anywhere else, expressed in short concise statements. He offers contrarian views to popular memes – such as “success is mainly luck”, “competition is good”, “sales & advertising are unimportant”, “technology is booming”, “diversification is good”, and that we live in the “developed world”. Thiel argues that success is usually because of reproducible reasons, competition is bad, advertising & sales are important, technological progress has slowed down, venture capitalists can’t afford to diversify and that the “developed world” needs to be developed. It will be especially interesting to anyone who is interested in the PayPal mafia and startup culture. Overall, it’s a worthwhile investment to read, especially considering how many bits of wisdom are packed into 195 pgs.