Last October I attended the Ethics of AI conference at NYU. (link to program notes and videos). I’ve decided to publish some of my tweets and notes from the conference here.

The philosopher David Chalmers did an excellent job assembling a lineup of the leading thinkers who work on the AI control problem.  Additionally, Daniel Khaneman (the Nobel prize winning psychologist) and Jurgen Schmidhuber (a famous AI expert and co-inventor of LSTM) happened to be in the area, and dropped in on the conference and were invited to participate in the panel on the 2nd day. The famous philosopher of mind, Thomas Nagal was also present in the audience, as was Ned Block. I enjoyed meeting and talking briefly with Eliezer Yudkowsky, Stephen Wolfram, Yann Le Cun, Kate Devlin, and Jaan Talinn.

Some takeaways I tweeted:

Some highlights from the conference 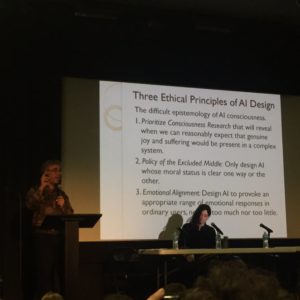