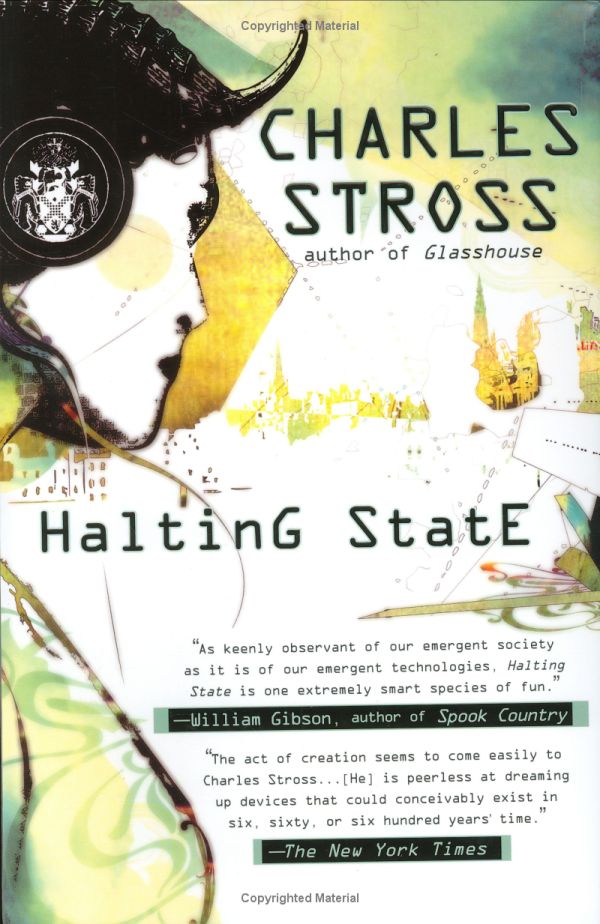 I originally learned about Charles Stross at the Rensselaer Polytechnic Institute transhumanism club, where his books Singularity Sky and Accelerando where highly lauded. Shamefully, I have not yet read either of these yet. As it turned out I picked up some different books by Stross when the Borders Books in Smithtown closed down.

Halting State was not as fun to read as Saturn’s Children, but was interesting in a few respects. Halting State is “near future sci-fi” which means it depicts a future that we could conceivably see in the next decade. The novel is prescient in several ways.  In the seven years since it was written, some of Stross’s predictions have almost come to pass as described.  For instance, it takes place in a newly-independent Scotland — something which seemed impossible a few years ago but almost happened in 2014 and now seems likely to happen in the next century. The use of augmented virtual reality a la Google Glass is near universal.  Cops carry body mounted cameras – something that is being pushed by activists & politicians today.  Most Taxis are driven remotely by outsourced drivers in India — while this particular concept is a bit incredulous, it is not too different than the driverless car technology currently being developed.  The thought of driverless cabs being hacked is indeed terrifying.

The plot revolves around a recent bank robbery in the MMORPG of Avalon Four. Stross describes MMORPGs as having their own economies, which require “management” by quants working behind the scenes. He also introduces the idea that game worlds can overlap with the real world via augmented reality (such when real-world people are overlapped with their avatar during real-world face-to-face encounters.). He also introduces the idea of augmented-reality games, which are currently becoming popular on mobile devices, and the rather original idea that gamers in such games might be secretly manipulated to achieve certain ends.

The narration is first person and revolves between three of the main characters. The story is engrossing, but the alternating POV makes the flow of the plotline a bit disjointed. Certain fine points left me bemused, something which I’m not sure was intentional.  I also felt like book ended a bit abruptly, and the romantic/sexual tension between two of the protagonists was never fully resolved one way or the other (admittedly, this was never a really important part of the narrative) .

Overall, if one has never read Stross, one may want to start with one of his other scifi books first. Next on my list – Accelerando.