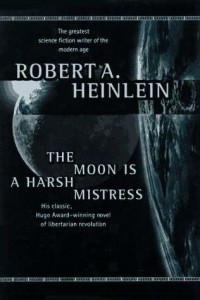 The Moon is  Harsh Mistress

by Robert A. Heinlein

A few months ago I finished reading The Moon is a Harsh Mistress by Robert A. Heinlein.  I was shamefully unaware that this was one of the greatest works of science fiction ever written. Previously the only other work by Heinlein I had read was A Stranger in a Strange Land. What drew my attention to The Moon is a Harsh Mistress was the fact that it was recommended by Elon Musk as one of his favourite books.

The Moon is a Harsh Mistress was a fun read, and brims with the type of technological optimism that was characteristic of the golden age of sci-fi. I found the slangy, colloquial prose which Heinlein employs to be a turn-off at first, but I got used to it by the second or third chapter. Once you get used to the style of the prose, you begin realize the brillancy of it. The colloquial prose sucks you into the world of the  “Lunnies” who are convicts that were sent to the moon, very similar to the way prisoners were sent to Australia in the 1800s. “Lunnies” have developed their own culture and dialect.

The story revolves around a small cast of three characters who lead a revolution to overthrown the Earth-based control of the moon. Earth dwellers keep demanding hydroponically-grown food from the moon, but at an artificially low fixed price, and without regards for the needs of the farmers (who require things like fertilizer). The lack of a market mechanism means that the lunar-farming is unsustainable, but Earth authorities refuse to recognize this fact, and have come to see the food as their “right”.

The revolution is led by the eccentric professor Bernardo de La Paz, who conceives of using a “cell structure” organization. The mission is assisted by the narrator (a computer technician) and a benevolent super computer named Mike. The Earth authorities are not aware the lunar central computer is sentient, so having Mike on their side gives the Lunnies a big advantage. Fighting the Earth (which has some space-based weaponry), is no easy task though and takes considerable ingenuity.

The novel contains several libertarian ideas. [Heinlein expressed such ideas in several of his novels. Whether he was actually a libertarian (in the modern sense of the term) is less clear, as explained in this podcast.]

The main libertarian idea here is succession – the idea that people have the right to self-government. The concept of succession can be extended to groups as small as one individual — this notion of “radical succession” (originally articulated by Ludwig von Mises) is central to underlying moral framework of anarcho-capitalism as first espoused by Rothbard in the 1960s. It seems very unlikely that Heinlein knew of the work of Rothbard during the time of the writing, although he did meet Rothbard later in the 1970s.

Bernardo de La Paz has a political philosophy which he calls “rational anarchy”. He describes it thus:

“I will accept any rules that you feel necessary to your freedom. I am free, no matter what rules surround me. If I find them tolerable, I tolerate them; if I find them too obnoxious, I break them. I am free because I know that I alone am morally responsible for everything I do. ”

(minor spoiler alert: ) The final goal of the revolution is not an anarchist society, but more of a minimal democratic workers state, established through a constitutional convention. La Paz introduces this idea (among others):

“Let the legislators pass laws only with a two-thirds majority… while the repealers are able to cancel any law through a mere one-third minority. ”

The novel is famous for its use of the abbreviation TANSTAAFL  (“There Ain’t No Such Thing As A Free Lunch”). Because Lunnies live in a completely artificial environment,  concept of TANSTAAFL can be applied to everything in the lunar colony – even the air they breath costs something to produce. The way these things are managed is quite interesting – food, water & air can be exchanged between different families (which are polyandrous/ poly-amorous, by the way).

Altogether this is a fun read, with a fair amount of suspense that keeps you engaged. The political philosophy of Prof. la Paz is amusing and the somewhat “wild west” culture of the Lunnies, while at times seeming quite absurd, somehow always ends up being believable.  This is also top-notch hard sci-fi, so the challenges of living and working on the moon are all addressed quite well.  Overall Heinlein presents an  optimistic and plausible view of how a self-sustaining and ever-growing lunar colony might operate.