Polyhedra have fascinated people for a long time. With their straight edges and flat faces, they appeal to human’s desires for order and perfection. Their physical manifestations are almost always a product of human thought and intellect.

Plato was definitely a polyhedra fetishist. The polyhedra he promoted are probably the five most famous polyhedra in the world today. No serious nerd hasn’t heard of the cube, tetrahedron, octahedron, dodecahedron and icosahedron. These polyhedra are so cool, Plato thought all matter must be made up of them – a famous theory which people bought into for centuries and is today is still lauded in history & philosophy classes as grade A BS.

In addition to these forlorn children, I want to introduce some other polyhedra that are under appreciated. The polyhedra I want to discuss are space-filling. This means that you can tessellate (ie. stack) them and they will fill space with no gaps! Of the Platonic solids, only the cube has this property. Aristotle however thought the tetrahedron fills space, just showing why you can’t always trust the wisdom of the ancients. (It amusing to wonder how long it was before someone bothered to check if Aristotle was right by actually taking some tetrahedra and trying to fill space with them. Apparently it didn’t happen in his lifetime – as is typical of Greek “science”, they didn’t bother to check most things experimentally, especially when it was coming out of the mouth of somebody as famous as Aristotle.)

There are five space filling convex polyhedra that have regular faces:  the triangular prism, hexagonal prism, cube, truncated octahedron and the weird-ass gyrobifastigium:

Once again, there are only five polyhedra with this property: the cube, hexagonal prism, rhombic dodecahedron, rhombo-hexagonal dodecahedron, and truncated octahedron

[Note for physics nerds – these five polyhedra come up a lot in solid-state physics, because they form the Wigner-Seitz cells (or Brillioun Zones, in k-space)  for the cubic, hexagonal, FCC, body centered tetragonal and BCC lattices respectively. Those are all very common crystal lattices!]

It’s also to see how these fill space: 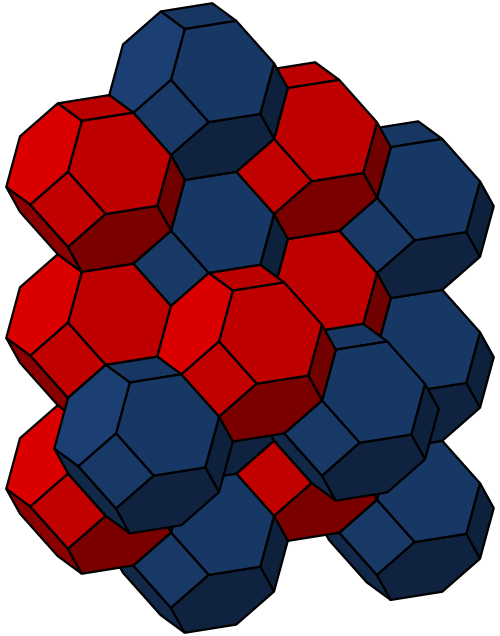 By now some of you may be wondering what this has to do with my research. If so, stay tuned because that shall be revealed in the next post! If not, I hope you at least enjoyed the pretty pictures.